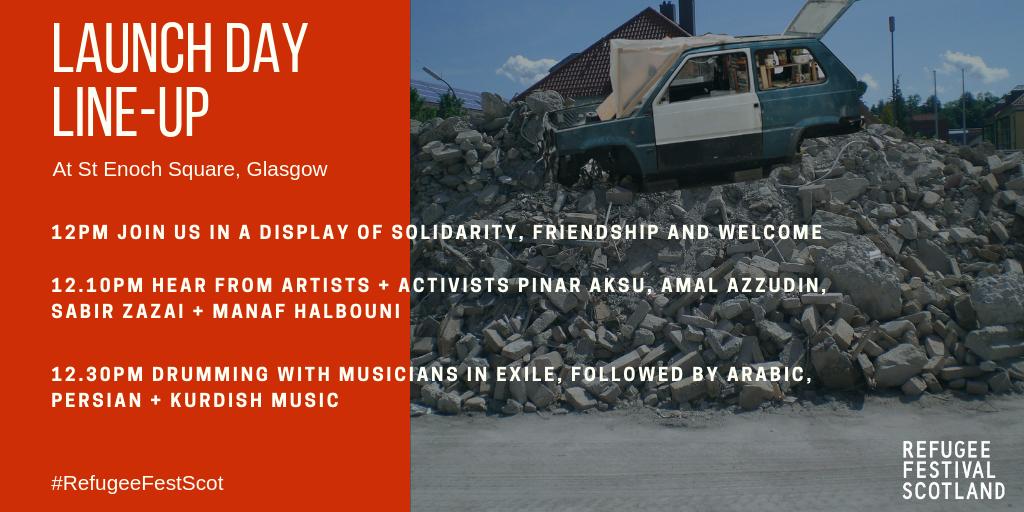 A square in Glasgow city centre will be transformed into a rubble-strewn bombsite as part of Refugee Festival Scotland.

The art installation is being created by Syrian-German artist Manaf Halbouni. It features an abandoned car packed with belongings and surrounded by a bombsite landscape of broken bricks and rubble. The sculpture will take up residence in St Enoch Square from 20 – 27 June.

The inspiration for the work came to Halbouni as he looked at photos of war-torn Syria, where he lived as a child. He said:

“I was amazed by pictures of the war in Syria that showed people trying to keep on creating art and culture among the rubble and destruction of the war. I saw a photograph of a piano player sitting among total devastation in a Palestinian refugee camp, and another of children in a camp playing with puppets.”

The Glasgow project is a ‘huge experiment’ for Halbouni as it is being created on a very small budget. He hopes the sculpture, called Rubble Theatre, will inspire people to talk to each other about issues around forced migration.

Rubble Theatre will launch on World Refugee Day (June 20) to mark the opening of Refugee Festival Scotland. The annual arts and culture festival celebrates Scotland’s growing diversity and showcases the talents of people with refugee backgrounds.

More than 100 events will take place across Scotland over the course of ten days in June (20 – 30). From Syrian food to Ethiopian poetry, football to dance, visual art and family days, Refugee Festival Scotland promises something for everyone.

“We are delighted to be working with Manaf Halbouni on this year’s Refugee Festival Scotland and we are really proud to welcome him to Glasgow.

“The theme of this year’s festival, MAKING ART, MAKING HOME, showcases the creativity and strength required to rebuild a sense of home in an insecure and often hostile environment. This year, around 4000 people sought refugee protection in Scotland, becoming our new neighbours, friends and colleagues.

“The festival gives audiences the chance to say welcome to people who have recently arrived in Scotland and to show friendship and solidarity with people seeking safety here.”

Rubble Theatre is commissioned by Counterpoints Arts and Refugee Festival Scotland and is supported by Creative Scotland.