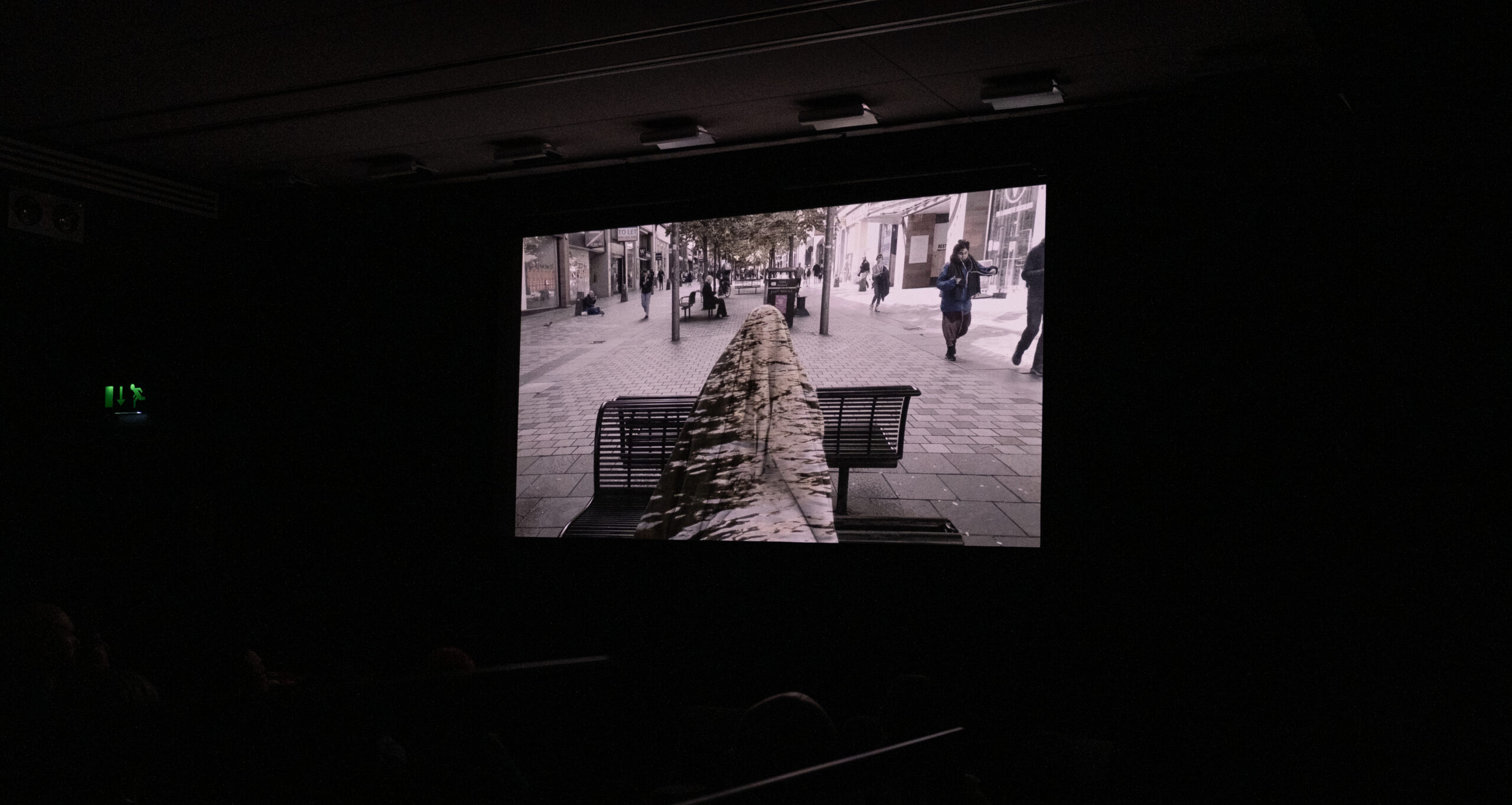 #RefugeeFestScot round-up: Beyond the Lines

On Thursday 16th June, Refugee Festival Scotland 2022 kicked off with the premier screening of “Beyond the lines”; a short film created by our Cross Borders project. The screening was followed by a panel discussion with the Film Maker Lucas Chih-peng Kao and Poet Sawsan Al Areeqe led by Sara Shaarawi.

“Beyond the lines” is a short poetic experimental film shot in Glasgow and Edinburgh on an iPhone, and is based on written, narrated, and performed pieces of writings by a group of writers from a Refugee background – in both Arabic and English languages – around the themes of home, refugee, and identity.

Lucas collaborated with the movement artist Ernesto Fernandez who walked Glasgow’s streets wearing a green man-suit which enabled Lucas to layer that green screen with imagery echoing the themes of the shared writing pieces.

Images of roads, people, nature, rubble were walking around surrounded by the ordinary streets of Glasgow and the ordinary people walking by.

“I wanted to create a double field detached from that world around” says Lucas, ” I wanted to look at the invisible baggage we carry and the impossibility of blending in”.

Lucas felt a personal connection with the material drawing from his own 19 years of experience in Scotland after migrating from Taiwan, still struggling to fit in from time to time.

Sawsan Alareeqe is a Yemeni poet and a filmmaker. She did a reading of her poem “completion” in Arabic and English, an excerpt of which also features in the film.

“Nothing complete remains, The sun rises to set, people grow old to die, life completes to perish” The poem reads. “It reminds me of how life is, how my life is” Sawsan says. “Growing up then arriving to this country, the dream is fading away”.

In the film, Midya Jan, narrates in Arabic the story of ISIS invasion of her village in Syria, how scared they felt and how life “has turned into a nightmare.” She then delves into the deep fear caused by the repeated pain of war “We are always alert for something to happen… afraid of the unknown”.

Ako Zada, sings his written piece, titled “my pigeons”, a young boy – himself – cries over his pigeons whom he couldn’t rescue when the Iraqi tanks invaded his city in Kurdistan.

While Aref Ghorbani encourages us to “Imagine even if imagination is forbidden,” and Adam Kashmiry’s reminds us that “You only live once they say, so build your dream castle and die before you see it finish”.

The film ends with a message of hope. Midya sings in Kurdish, Henda Nahene, meaning life is short and it’s meant to be enjoyed, so let go of the sadness and live it!

Beyond the Lines was commissioned by Scottish Refugee Council through our Cross Borders programme of arts and cultural activism projects. Including thematic events, workshops, mentoring, commissions and collaborations for, by and with artists, activists and cultural practitioners from refugee and other migrant backgrounds.

Watch this space for more info about how you can watch the film!