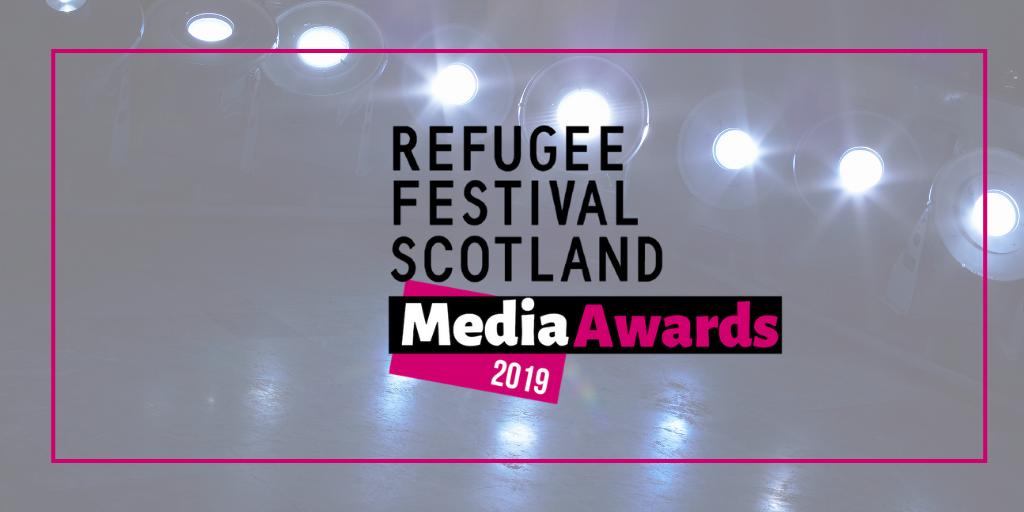 On Tuesday 25th June we held our annual Refugee Festival Scotland Media Awards at Corinthian Club in Glasgow, to recognise and celebrate standout quality reporting on refugee issues by journalists in Scotland.

The event was opened by our Chief Executive Sabir Zazai, who said “excellent journalism can give a voice and humanity to refugees”.

Our #RefugeeFestScot Ambassador Marwa Daher gave a powerful speech about her experience of fleeing Syria, living in Jordan and moving to Scotland, before presenting the Features Award.

Runner up in the Features Award was Marc Horne, for his piece in The Times – Big Yin pops in on Bute’s Syrian Scots.

The Winner of the Features Award was Paul English, for his piece in the Sunday Post – They started shooting at our school, so we hid in my teachers house.

Next up, our Policy Manager (and social justice warrior) Graham O’Neill presented the News Award.

Runner up in the News category is Niall Christie, for his piece in Barrhead News – Barrhead is a world away from the nightmare of life in war-torn Syria.

Winner in the News category is Marc Horne for his piece in The Times – Home Office uses debit cards to spy on asylum seekers.

The third award was presented by Nick McGowan-Lowe from NUJ Scotland, who gave an impassioned speech about the importance of journalism in raising awareness of refugee issues. He then presented the Investigation Award.

The runner up in the Investigation Award is Greg Russell, for his piece in The National – Home Office caught out over detained refugee.

The winner of the Investigation Award is John Ferguson for his piece in The Sunday Mail – Tories Deport Queen’s Baton Holder. The award was picked up by colleague Brendan McGinty on his behalf.

The next award was for Broadcast media. We watched or listened to the nominees, before the winners were presented by Mada and Osama from The Voices Network, who had judged the awards.

The runner up in this category was Paul English, for his BBC R4 piece on The Trojan Women.

The winner was Megan McEachern, for her Sunday Post feature on The Joyous Choir – No one can stop them singing.

Last, but certainly not least, we were delighted to award the Student Journalist award to City of Glasgow student, journalist and NUJ Glasgow member Ahmad Choukri Mourad, for his piece on the living conditions endured by him and his family.

This award was presented by Pinar Aksu and the MIN Voices group, who seized the opportunity to speak passionately about lifting the ban on right to work for asylum seekers.

Thank you to all of the winners, runners up, nominees, colleagues, friends, supporters, ambassadors and people willing to share their story who attended the Media Awards this year. It was fantastic to celebrate the exemplary work of journalists in Scotland covering refugee and asylum stories with you all.

The Refugee Festival Scotland Media Awards are organised by Scottish Refugee Council in partnership with the National Union of Journalists and British Red Cross.