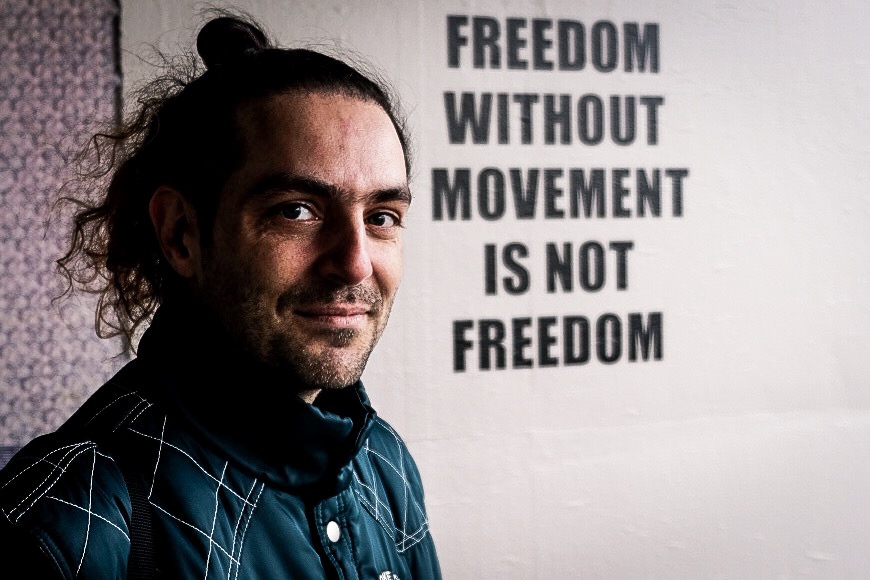 Iman Tajik’s public art installation “Freedom of Movement” refers to the 1951 Refugee Convention, a key legal document which defines the term “refugee” and outlines the rights of displaced people, as well as the legal obligations of UN member states to protect them. His project looks at “the right to travel as a human rights concept, encompassing the right of individuals to travel from place to place within the territory of a country, and to leave the country and return to it.”

Tajik’s poster, which will be displayed for 3 months near the V&A on the National Cycle Network in Dundee and by the Riverside Museum in Glasgow, displays a scanned image of the artist’s own refugee travel document. This stands alongside a statement which voices the contradiction between the freedom implied by the imagery of birds in the travel document and the suppression of freedom faced by displaced people.

The project was commissioned for Refugee Festival Scotland by Scottish Refugee Council, and is supported by Sustrans.

Iman also held an Artist Talk and Flag Making workshop at the V&A Dundee on Friday 28th June, which was a great success. His poster displayed in Glasgow has sadly gone missing/been removed, potentially by vandalism, and we are working to find out why, and to find a new location for his work.