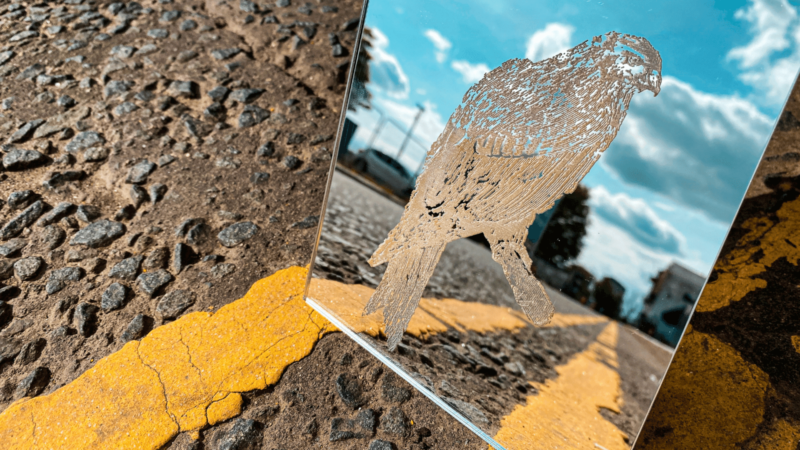 A unique performance which seeks to celebrate stories of migration, reflect on the fragmented journeys that many refugees face, and protest proposed asylum reforms.

This summer marks the 70th anniversary of the UN Refugee Convention, the international treaty that upholds the right to seek refugee protection and the legal obligations of states to provide for people seeking asylum.

Over the past seven decades, the Convention has had an impact on millions of people’s lives. But in 2021, the rights and principles it enshrines remain insecure and under threat.

To honour the anniversary of the Convention, Scottish Refugee Council has commissioned Paria Goodarzi and Francisco Llinas Casas of Distanced Assemblage to create a piece of public art in response to this complex moment in time.

Here, they talk about their artwork, AMBER, and what this moment means to them.

“We live in an ambivalent world where the cost of human conflict has reached more than 10,000 deaths of refugees in the Mediterranean since 2014. It’s clear that the values of the Convention are threatened and, with them, the freedoms and guarantees it endows to people seeking asylum.

So we ask ourselves, is this seventieth anniversary a time to celebrate or time to protest?

Can our protest be in itself an expression and celebration of freedom?

How can our actions help to document the moment of crisis we live in for future generations?

With AMBER, we wanted to make a radical artistic expression that could engage with personal aspects our stories of migration in a celebratory way and, simultaneously, protest against the current apprehension and reforms around the UK asylum system.

AMBER consists of two artists walking from Dungavel Detention Centre to the Home Office building in Glasgow through two different routes on the first day of Refugee Festival Scotland, Monday 14 June. We will push our bodies in this long performance, while wearing an engraved mirror on our backs. The engraved mirrors feature elements relevant to the Convention, commenting on the freedom of movement it guarantees.

Our performance responds to the different paths asylum seekers might take in their migratory journeys, commenting on the impossibility to judge their need for protection based on the way they arrive to our shores. Likewise, the walk from these two buildings examines the tension between the two ends of the system: the ‘Home’ office that can provide refuge according the Convention, and the ‘Removal’ centre where refoul takes place.

The reflection of the audience against the mirrors will uncover different layers of meaning, including the negotiation of identity and underrepresentation of refugees and minorities.

We also want people to look at their reflection against the surrounding reality of the city and think about issues of our contemporary social experience such as discrimination, political upheaval and inequality. We will bring these issues into the street with our walk from one place to another, reminding ourselves how civilised life and humanity coexist with conflict and displacement.

We invite the audience to ask questions, discuss and share while we perform our journey, providing a platform to engage with people and their socio-political concerns.”

Paria and Francisco will set off from Dungavel at 6am on Monday, 14 June. At around 1pm, they will spilt up, each taking a different route before reconnecting in Queen’s Park in Glasgow at around 3pm. Here, they will take a short break before beginning the final leg of their journey to the Home Office arriving at approximately 4.30pm.

We’ll be following their progress and posting regular updates on social media throughout the day. Join us on Twitter, Facebook and Instagram to see how they’re getting on.

Find out more about AMBER