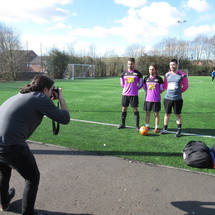 In just 26 days, submissions will close for Refugee Festival Scotland 2019!

The theme of this year’s festival is “Making Art, Making Home” – but that doesn’t mean you necessarily have to think of something artistic to get involved. A few years ago, we caught up with players at Glasgow Afghan United – who displayed the power of football in bringing people together and “making home”. They do call it “the beautiful game” after all…and that nickname alone has inspired films, musicals and songs about the joy and camaraderie it generates.

Perhaps your team wants to hold an event for Refugee Festival Scotland? Be it a game, an exhibition, a celebration, a screening of a film about the power of sport in bringing communities together…whatever you come up with, find out more about how to apply for our Open Programme and Small Grants Scheme here, and apply by March 17th!

We can’t wait to hear your ideas!

“On an unnaturally sunny day for late March I visited players from Glasgow Afghan United. The team’s inclusive ethos sees people from all over, some who are refugees, gather every Sunday to kick a ball around. It is clear that the match is as much a social event as it is a competitive match.

I met with two of the players after the match. We talked a lot about football, and a little about their experiences as refugees in the UK.

Masood is 22 and started playing for the team last year. He is currently studying pharmacy in Glasgow. Like many his age he worked incredibly hard to get to university. Yet his journey is slightly different…

“I was born in Afghanistan, and I was very young when my family and I moved to Pakistan due to war. I went to School there, primary and secondary.

The first city that I moved to was Leicester. When I first went to School it was the end of year 10. My English wasn’t that good. I was struggling a lot, that’s why I didn’t do English GCSE. I did maths and science because I did them back home.

To be honest my first year in Leicester wasn’t a good experience. Even though it was a very multicultural city, I still got bullied a lot in school because of my English, because of where I came from. At that time Afghanistan was still at war. People used to call me a terrorist and stuff, it was really difficult, and I had a really difficult time. But I got over it.

All these people from school have graduated from university now because I had to do my GCSE’s again in college and then A levels. By the time I had finished my A levels they were in their last year of university.

After college I moved to university. I wanted to do medicine but my grades weren’t good enough. I did one year biomedical science in London; from there I changed my course to pharmacy in Glasgow. I moved quite a lot but finally I’m here.

When I first moved to Glasgow I contacted Glasgow Afghan United and told them I wanted to play football and join in the society. If I could contribute I would be more than happy to.

I joined the football team and met some really good people.”

Ramatullah is 23 and perusing a career in football. Football has always been his passion, and one that he has developed whilst playing for the team.

“I’m originally from Afghanistan. I had been living in Afghanistan since I was a kid.

I came to Scotland when I was fifteen and a half.

When I first came here people were very welcoming. I was sent to live with a Scottish family. I have had so many experiences. I have been to a Scottish wedding and I actually wore the kilt!

When I arrived I didn’t have many friends. The one thing I was very passionate about was football, so I found lots of other people that also liked football.

The thing I like most about the team is every week players come here with a smile on their face ready to play football. We talk, we say ‘how have you been,’ ‘how is work,’ ‘how is college,’ stuff like that. It absolutely shows the happiness that comes from this team.”

I watch the team together as they embody solidarity, supporting each other through friendship and sportsmanship. Their past experiences and what some of them have fled is a constant but irrelevant part of this moment.

Football is not always about winning. Football can unite instead of divide, and it is clear after visiting the team that it can provide common ground for people from all over the world to get together and inspire each other through inclusivity.”